Monday 6 June
A Wood Sandpiper and a Green Sandpiper at Douglas Water Pool/Loudon Pond,
A pair of Shelducks with six young at the inland site Carstairs Junction Bridge; unfortunately, all birds have deserted the South Medwin site due to the pools having dried out, 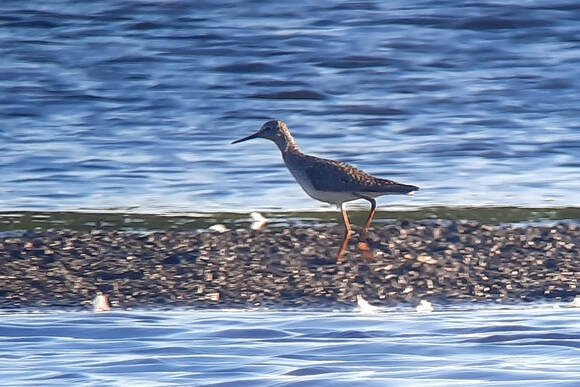 Friday 10 June
A Little Egret at Douglas Water Pool/Loudon Pond.
A Green Woodpecker again at Kingshill LNR, Allanton.
Good counts of approximately 200 Swifts and 100 Swallows with Sand and House Martins at Castle Semple Loch, presumably due to the high winds.

Sunday 12 June
A Long-tailed Duck with Eiders in Cardross Bay.
An unusual June record of a male Redstart at Town of Inchinnan.

Monday 13 June
A petrel species originally thought to be a Fulmar, but later considered to be a probable Manx Shearwater flying south inland over Shields Road, Motherwell.

Tuesday 14 June
A Common Tern hawking at Castle Semple Loch in the morning.
An escaped Harris's Hawk at Calderbank, Airdrie.
A Great White Egret flying from Ardmore in the direction of Cardross at dusk. 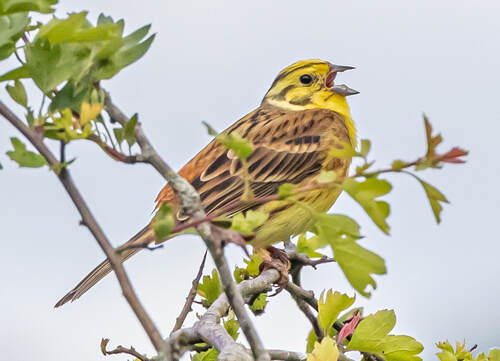 Thursday 16 June
Good news on Lapwing breeding from Balmore Pool where one young is visible, and also at RSPB Lochwinnoch which has three pairs on the scrape with one pair with four young, also at the reserve a Spotted Flycatcher showing well, and the two unseasonable Pink-footed Geese continue.

Friday 17 June
Another Lapwing brood at Balmore Pool with two chicks.
Another pair of Shelduck with brood of three at Carstairs Junction Bridge; but sadly, the first brood of six has disappeared.

Sunday 19 June
Two Great White Egrets (one in breeding plumage) at RSPB Baron's Haugh, also an Osprey over in the morning.
A Quail calling at Cathkin Marsh SWT Reserve in the morning.
An Osprey at Town of Inchinnan, also still a male Whinchat.

Monday 20 June
Two Great White Egrets (one in breeding plumage) showing well at RSPB Baron's Haugh, also an Osprey over in the morning.
An Osprey over Aird Meadow, RSPB Lochwinnoch. 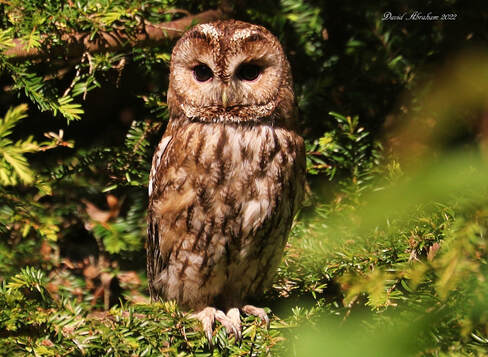 Thursday 23 June
A report from a couple of walkers this morning of "a big white Heron" flying off the river at Carbarns, between Adder's Gill and Merryton Pond.

Friday 24 June
A Red Kite over Culter Glen, near Biggar.
An Osprey over River Kelvin in direction of Balmore Pool in the evening.

Saturday 25 June
A Green Sandpiper on the Merryton side of River Clyde.

Sunday 26 June
A 1st-summer Mediterranean Gull with metal ring and a Green Sandpiper this evening on the new scrape at RSPB Lochwinnoch, also a Redshank and still the two Pink-footed Geese.

Tuesday 28 June
Now two Green Sandpipers and a Greenshank on the new scrape at RSPB Lochwinnoch, also a Redshank; later two Ospreys over Barr Loch in the evening. 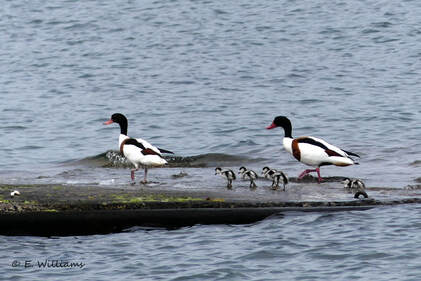 Shelduck © Eddie Williams
​Wednesday 29 June
A single Green Sandpiper on the new scrape at RSPB Lochwinnoch.
A singing Reed Warbler and a Greenshank at Newshot Island.
An Osprey fishing at Helensburgh Reservoirs.
A good count of six Whinchats at Balcorrach Wood, Clachan of Campsie.

Thursday 30 June
A Temminck's Stint at the NE end of Balgray Reservoir, last record for Clyde was in 27 June 2004 at Carbarns Pool.
Although we advised that any rare breeding birds would not be reported on this site, RSPB Lochwinnoch has kindly advised that it is happy for us to release the news that a pair of Little Ringed Plovers with four small chicks was observed yesterday on the new scrape. The family can be viewed along with Lapwing and Oystercatcher chicks, without disturbance, from the tower or Channel Hide; also, another adult Little Ringed Plover present today and a 1st-summer Mediterranean Gull again with the Black-headed Gulls. 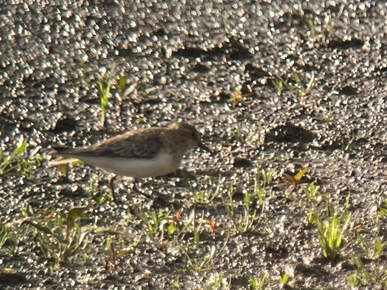